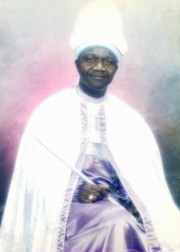 Prophet/Most Special Apostle Michael Olayinka Osilesi (Iye Lomo Jesu) was born in Lagos, Nigeria on April 7, 1952 to Mr. and Mrs. Ezekiel Osilesi of Makun, Sagamu. He went to Epe Divisional Grammar School, and graduated in 1970. He was ordained as a prophet in 1974, under the spiritual leadership of his mother, Prophetess/Founder, Selina Iyabode Odede of Mount of Salvation C & S Church, Ajegunle.

He traveled to the United States of America in 1977. He attended Southeastern University in Southeast Washington and graduated with a Bachelor of Arts Degree in Marketing in 1981. After graduation, he went back to Nigeria for his Youth Corp Service and returned back to the USA in 1987.

He founded the Eternal Sacred Order Mount of Salvation C&S (Oke Igbala) in Hyattsville, Maryland, which was originally registered in 1978. He was ordained as Most Special Apostle in 1997 in Lagos at the Sacred Order of Cherubim and Seraphim Church Praying Band, Itabalogun at Akitan street in Lagos, Nigeria, under the leadership of Baba Aladura Benson.

He was a member of the Nigerian United Council of Churches, U.S.A., Inc., based in Washington DC, and the public relations officer for the Unification of Nigerian Churches.

He died in September 14 1999, after a brief illness. He was survived by aged mother, wife, children, brothers, sisters, nephews and nieces.

May his soul rest in perfect peace in the Lord.  Amen

Where to Find Us: