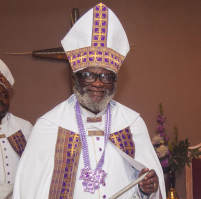 Supt. Oluwole  graduated with BSC in Criminal Justice at the university of the District of Columbia. He was called by God and left his profession to follow the Lord.

Supt. Oluwole came to America in search of a greener pasture in 1980, and has been a member of the Mount of Salvation ever since. He was a dedicated follower of the Founder of Mount of Salvation, Late Special Apostle Michael Olayinka Osilesi, all the way from the Bar Beach in Lagos.

Where to Find Us: